Jump Rope Like an Egyptian – Jump Rope in Egypt 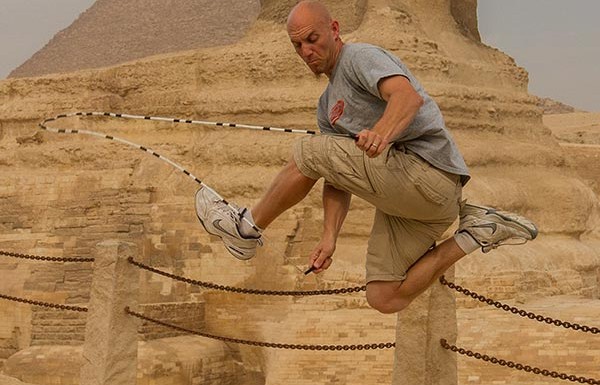 Every time you travel somewhere new, you usually have some sort of idea on what it will be like. Egypt was quite an experience on so many levels. The one that really stood out to me was what the state of jump rope in Egypt was like and how they got there. If you would like to read about the trip itself, jump over to my performance site for a run through on what we did. I want to focus on jump rope in Egypt.

I was first contacted about putting on a series of jump rope shows outside of Cairo for a festival. They were planning on roughly 10,000 people per day and were bringing in a variety of performers that would be putting on 2-3 shows per day each. The day after they contacted me, another individual out of Cairo asked if I would be willing to put on some jump rope workshops at some point. At this point, I was thinking that I really needed to go to Egypt.

The festival shows went really well and we had a pretty good crowd at each of the jump rope demos that I put on. After I finished my final show I was asked if I could put on a 7 minute jump rope show for the main meeting that night that would be broadcast throughout the Middle East. Of course I was up for that and I was then whisked over to the main stage to discuss everything with their sound and video crews. That night there were over 6,000 people watching my show live and then countless others watching the live video channel as well. It was a fun demo and everyone seemed to thoroughly enjoy it. After the show as we were packing up, I had one individual apologize for the conservative crowds I had been performing for over the past 2 days. He said that many people in Egypt don’t know how to respond when they see a new sport. I assured him that I had run across that problem my whole life.

I got thinking about this over the next few days as we traveled around the country doing some sight seeing excursions. Jump rope in Egypt is a new thing. Not a lot of people have seen it and fewer have been involved with it. I was curious as to the skill level I would encounter when I met up with the jump rope team/group the following week. This is where I was in for the biggest surprise of the trip.

Ahmed and his wife Mai jumped at the opportunity to host Alicia and I when I told them that we would be in Egypt for the festival. They cleared their calendars and made sure that we would see some of the awesome sights in Cairo during the day before having us teach their small jump rope team for 4 hours each evening. We had our practices on the roof of a 24 hour gym in new Cairo (not to be confused with Old Cairo which is full of…well all the old stuff). Whenever I start working with a new group, I like to run through a series of warm-up drills to see what their jump rope skills look like. I had been planning on doing some basic stuff, but quickly had to ratchet up the difficulty level.

These guys knew how to jump rope in Egypt! 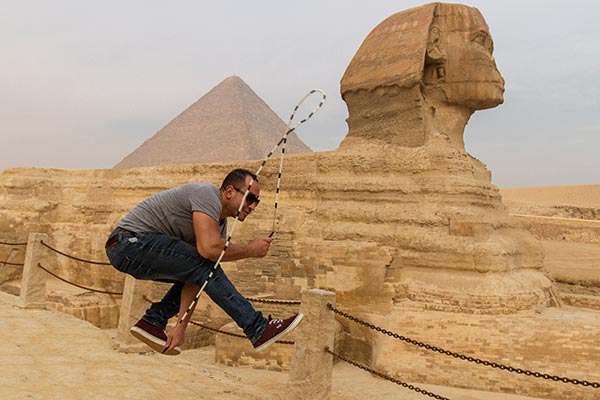 It’s always possible that when people can do double and triple unders and some criss-cross skills that they might have learned them on their own. However, as soon as I saw a couple people do some rope release tricks, I had to ask: where did you guys learn how to jump rope? The answer that Ahmed gave me was straight to the point: your videos. At this point, everything clicked in my head. Now I know why they contacted me directly about putting on the workshops and why they could do some real jump rope skills. When we taught in Nigeria earlier this year, everything they had learned about Double Dutch came from one of our DVD’s. The same thing here in Egypt. Even though people have been using my jump rope videos around the world, it still astonishes me just how far they have gone. The internet has really shrunk the world and made it possible for people to learn anything. It was so much fun to help these guys progress in their skills, but it turns out that I had already taught them everything they knew from the beginning.

We had a fantastic time performing and teaching jump rope in Egypt and can’t wait to go back some day soon. We covered single rope, double dutch, chinese wheel and long rope skills. I love helping people get their first few jumps in chinese wheel and 2 of their jumpers did it for the first time with me! This trip really did highlight the goal of what I’m trying to do here at Jump Rope Secrets. I want to make top quality jump rope instruction available for people all over the world. I want to teach more people than I could ever meet in person. It’s really awesome to see that happen. If you want to learn how to jump rope like an Egyptian, turns out you can do so right here at Jump Rope Secrets!